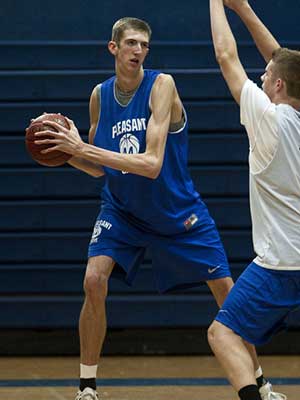 Alan Hamson is a prospect for the BYU basketball Class of 2015. He plans to walk-on at BYU for the 2015-16 season. He prepped at Pleasant Grove High School (UT) where during his senior season (2011-12) he averaged 10.7 points, 7.9 rebounds, and 5.9 blocks per game and was voted team MVP. He was also named an honorable mention to the Deseret News all-state team, as well as to the Provo Herald All-Valley and Region 4 teams. His 123 blocks in a season is ranked #2 in Utah state history behind Shawn Bradley. He graduated from High School with a 4.0 GPA and was getting interest from a handful of Ivy League Schools.

Following High School Hamson served an LDS mission to southern California (Ventura), leaving August 2013. He was lightly recruited out of high school, possibly as a result of his corrective back surgery to repair scoliosis (abnormal curve of the spine). The surgery resulted in a change in his height from 7’0″ (what he played at in High School) to 7’3″.  He has not been rated by Rivals, Scout, or ESPN, however it has been rumored that he has been offered a handful of scholarship offers from smaller schools. He was recruited by BYU, Utah, UVU, USU, as well as a handful of Ivy League Schools.  However, none offered scholarships due to his health concerns.  He is the younger brother of BYU basketball/volleyball standout and L.A. Sparks center Jennifer Hamson.

A Fan Thank You to Jay Omer